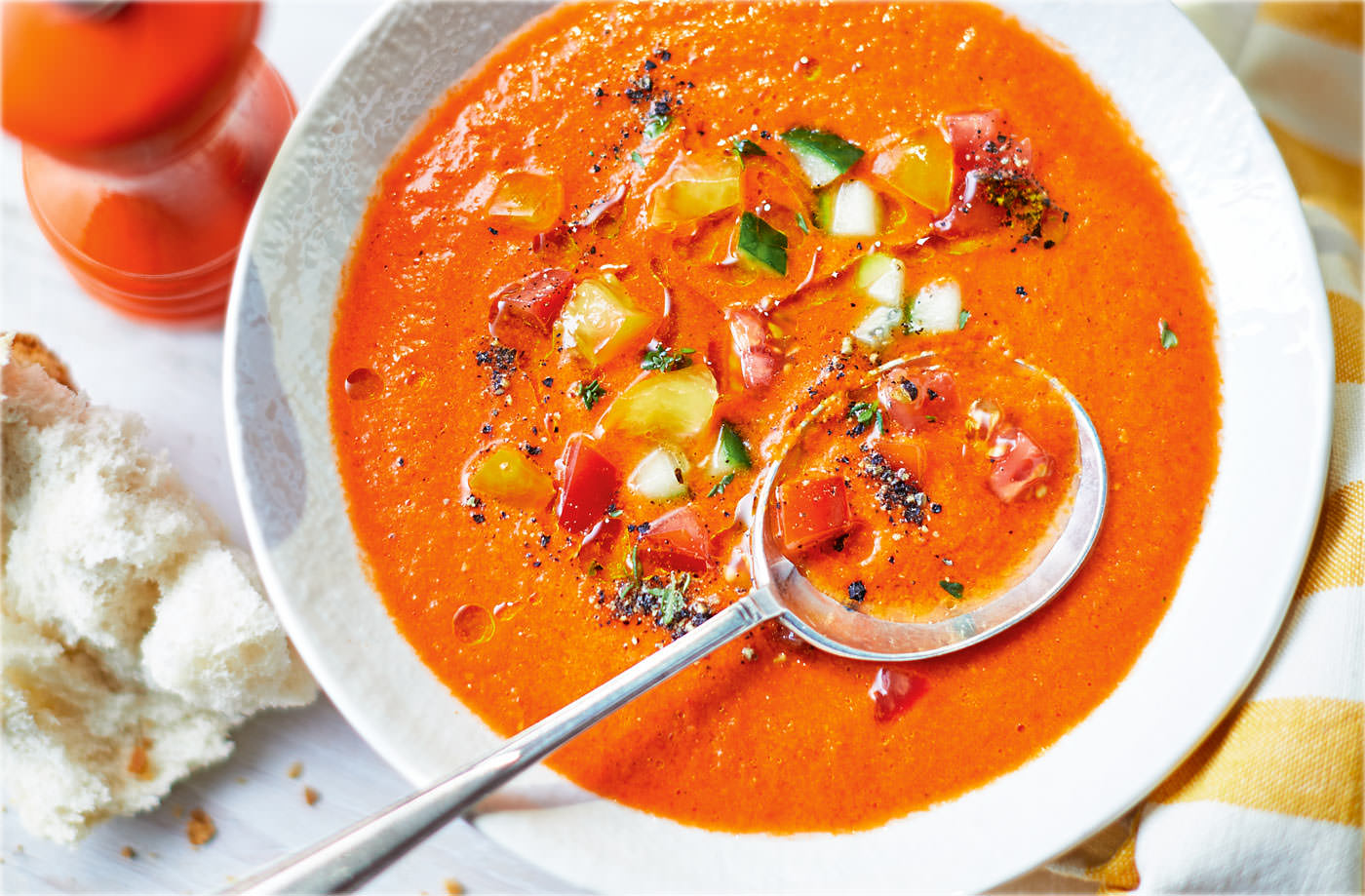 I’m sure you have heard of gaspacho, but do you know what it is? If you haven’t, it’s a traditional Spanish cold soup made with tomatoes, cucumbers, onions, bell peppers and garlic. It can be enjoyed as an appetizer or a meal! Some even make gazpacho out of watermelon in the summer time. You can find this tasty dish in restaurants across Spain!

If you are looking for a new summertime recipe, this gaspacho recipe might be exactly what you need. Made from raw vegetables and fresh herbs, this chilled soup makes the perfect appetizer or refreshing snack on those hot summer days when you feel like taking it easy and eating something light.

Gazpacho or gazpacho (also called gazpachuelo in Spain) can be made with many types of vegetables, but the most common ones include tomatoes, cucumbers, peppers, onions, and garlic. Its tart flavor is created by blending the vegetables with a liquid, such as water or vinegar, while some recipes also call for lemon juice or sherry vinegar. It’s often served with bread or croutons on top as well as fresh herbs like parsley or basil. You can even top your gazpacho with fried egg!

There are several hypotheses about the origins of gazpacho, one of which is that it is a soup made of bread, olive oil, water, vinegar, and garlic that came in Spain with the Romans. It became popular in southern Spain, particularly in the Castilian kingdoms of Córdoba, Seville, and Granada, where it was made with stale bread, garlic, olive oil, salt, and vinegar, similar to ajoblanco. When tomatoes were added to the components in the 19th century, crimson gazpacho was born. This rendition gained popularity around the world and is still widely known today.

Instead of tomatoes and bread, modern gazpachos include avocados, cucumbers, parsley, strawberries, watermelon, grapes, meat stock, shellfish, and other items.

Meanwhile, gaspacho’s ingredients, texture, and thickness vary by location and by family. Cold tomato soup qualifies as gazpacho soup on the most basic level, as tomatoes are the main ingredient; nevertheless, other vegetables are commonly added for flavor.

How to make Gaspacho step by step 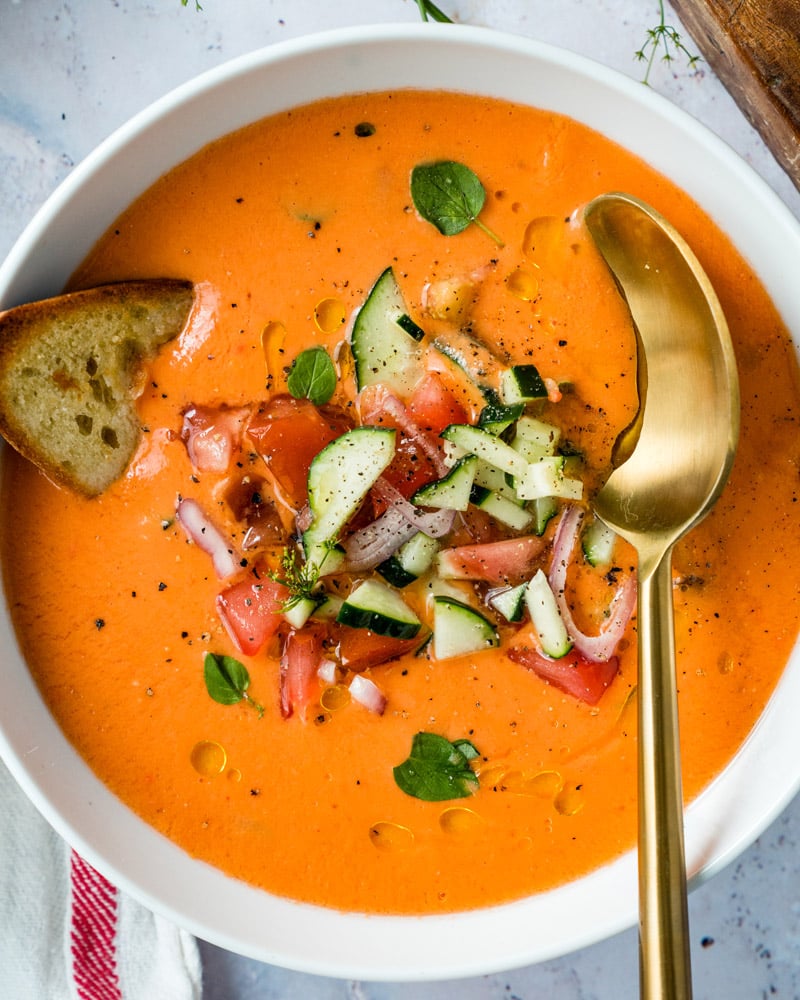 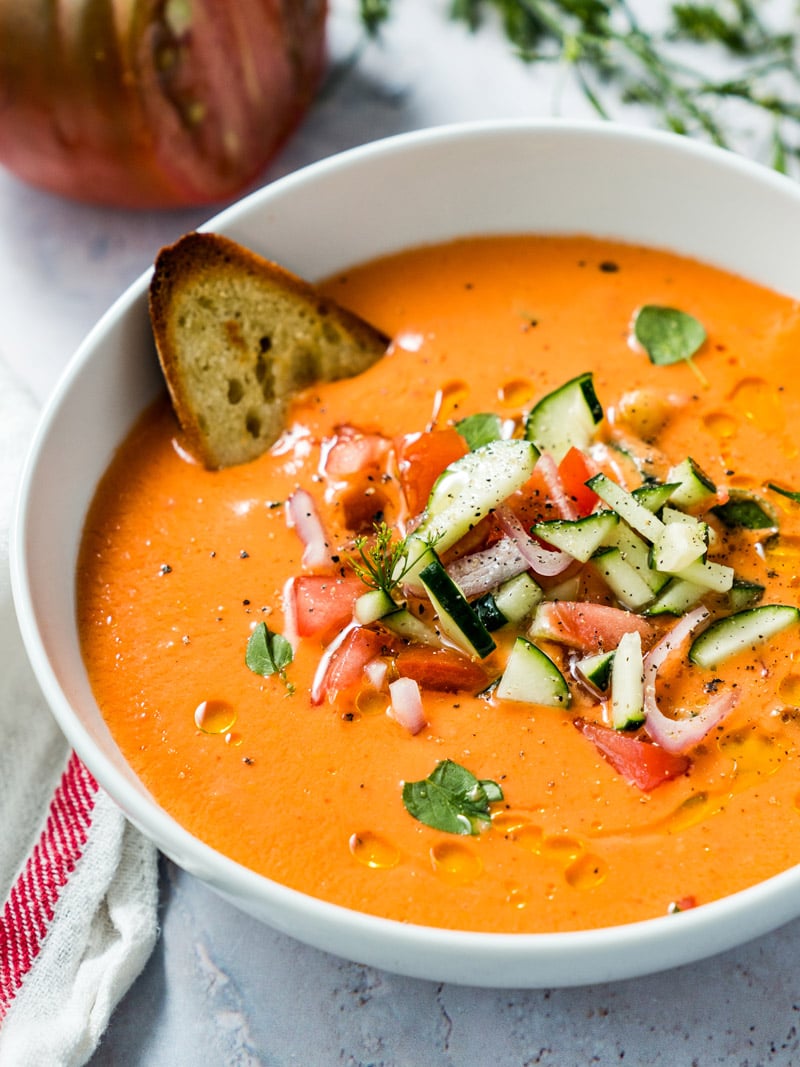 Video on How to make Gaspacho

Video Title: How to make Gaspacho

Learn how to make gaspacho. This is a video on how to prepare your gaspacho.

Gaspacho Recipe – One of the most popular cold soups in Spain, gazpacho originated as peasant food in Andalusia, made with available ingredients and flavored with vegetables, bread, olive oil and vinegar. Gaspacho is typically served chilled and can be topped with diced cucumbers, tomato, peppers or chives and garnished with parsley or basil. Gaspacho can be served as an appetizer or as a light lunch and pairs well with various types of breads and garnishes, including toasted bread cubes drizzled with olive oil.