Goulash, or Gulash, depending on where you’re from, is a delicious Hungarian dish that can be both quick and easy to make in large batches so you can eat it throughout the week without re-cooking. It is traditionally made with beef stew meat and other vegetables such as carrots, onions, and potatoes. Gulash is seasoned with paprika and also has some tomatoes added in to give it an extra kick of flavor.

What is Gulash or Goulash?

Goulash, also known as Gulash, is a classic Hungarian stew with roots reaching back to the Magyar shepherds of the 9th century.

In Hungarian, gulya means ‘herd of cattle,’ while gulyás means ‘herdsman’ or ‘cowboy.’

Gulash can be made using beef, veal, hog, or lamb. Goulash obtains its thickness from robust, well-exercised muscles that are abundant in collagen, which is transformed to gelatin during the cooking process.

The stew was dried and preserved in sheep bellies, forerunners of today’s plastic containers. When it was time to dine, they would rehydrate it with water and feast.

Goulash was recreated some decades later in a big pot or kettle, where meat, vegetables, and, of course, paprika were cooked over an open fire for hours until everything was tender.

Meat is cut into bits, seasoned with salt, and fried with sliced onion in a pot with oil or lard. Paprika is added to the goulash, along with water or stock, and it is then left to simmer. After a period of cooking, add garlic, whole or ground caraway seed, or soup vegetables such as carrot, parsley root, peppers (green or bell pepper), and celery.

Cayenne, bay leaf, and thyme, among other herbs and spices, could be included. Potatoes, diced, can be added since they provide starch while simmering, thickening and smoothing the goulash. 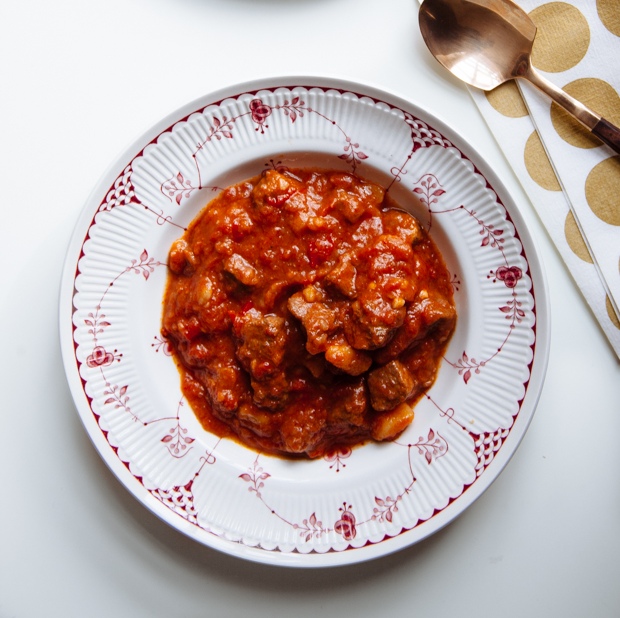 Video on How to make Gulash

Video Title: How to make Gulash

Learn how to make gulash. Goulash is an Hungarian beef stew. This is a video on how to prepare fantastic gulash.

How to make Gulash, endnote

Generally, Goulash is a soup, stew or casserole of European origin, with influences from Hungarian, Romanian and Czech cuisines. It’s made by simmering beef and other ingredients, such as potatoes, onions and carrots in water or broth, often flavored with garlic and paprika to give it the reddish-brown color that characterizes goulash. Here’s an easy recipe you can follow to make your own goulash at home in under an hour!